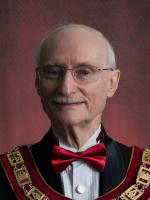 Brother and Companion Edmund Cohen was born in the Bronx, New York on September 18, 1940, the eldest child of Herman and Adele Cohen. Brother Cohen is a Phi Beta Kappa graduate of the City College of New York, did his graduate work at Columbia University, and legal studies at American University. He is an active member of the bar in the Commonwealth of Virginia and the District of Columbia. He joined the Federal Government in November 1967. He was an analyst, a Deputy Director of Personnel, a Deputy General Counsel, and Director of Information Management Services. He retired in January 2008 having received numerous awards for his service. He has been working as an Independent Contractor since 2009.

Please check with your Chapter for details prior to attending any upcoming meeting.

Finding a cure for Alzheimer's is goal for the Grand Chapter of Royal Arch Masons in Virginia. Each year that goes past, a discovery is getting closer. Each year our Grand Chapter, with your help, has been increasing our donations to help find a cure for this disease or helping to take care of those with this disease.